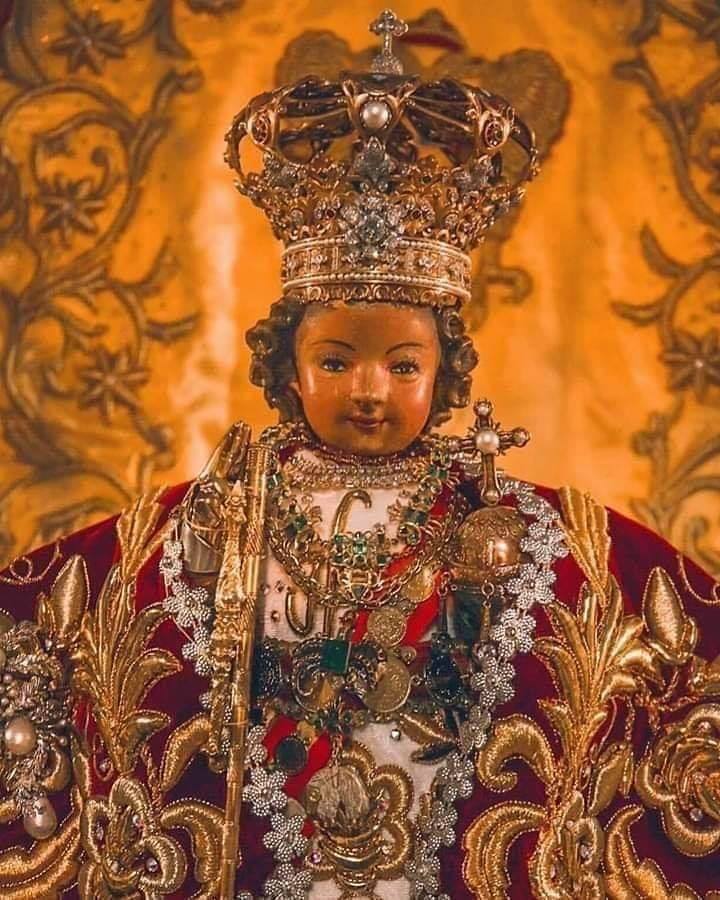 The Miraculous statue of the Infant Jesus of Prague is of Spanish origin. Most historians      believe that the original statue was carved around the year 1340 in a Cistercian monastery.  Some traditions claim that a monk had a vision of the child Jesus and fashioned the statue after what he saw.

It was brought to Prague by the bride, Maria Manriquez de Lara after her marriage in 1556 to  Vratislav of Pernstejn, a Czech nobleman. The statue once again served as a wedding gift when  it was given to Maria's daughter Polyxena, upon her marriage to Zdenek of Lobkowitz.  Unfortunately Maria's daughter Polyxena of  Lobkowitz had only sons, so she gave the  precious statuette to the monastery. On being  widowed in 1628, she decided to make the  statue available to all believers by donating it to  the Carmelites of Prague and the church of Our  Lady Victorous. In 1631,  when enemies of the  church sacked Prague, they mocked the Holy Infant and threw the statue into a heap of trash in an obscure place. Some years later in 1637, Venerable Father Cyril of the Mother of God originally from Luxembourg, a Carmelite of the Prague monastary found the statue. One day, while praying before the holy image, Father Cyril heard the consoling words, "Have mercy on me and I will have mercy on you; restore my hands and I will give you peace; the more you honor Me, the more I will bless you."

So many graces, blessings, and miraculous cures came to those who embraced this devotion that it spread throughout the Catholic world and continues to be a source of much grace to this day.

The Philippines has its own Infant Jesus known as Santo Niño De Cebu. The image arrived with Ferdinand Magellan and his spanish expedition in 1521. Presented originally as a christening gift to Sultan Humabon the local chieftain and his chief consort Hara Humamay of the island of Cebu in 1521.

The Basque explorer Miguel López de Legazpi led Spain's ambitious third expedition(after Magellan and Villalobos expeditions) to the East Indies. On February 13, 1565, his voyage reached Las Islas Filipinas and anchored off at the Indian Rajahnate of Cebu, but did not put ashore due to opposition from natives under Rajah Tupas, the ruler of Cebu and nephew of Rajah Humabon. So Legazpi left for the neighboring islands East of Cebu instead and befriended Datu Urrao of Samar, Datu Bankaw of Limasawa, and Datu Sikatuna and Rajah Sigala of Bohol.

In the battlefield, a soldier of López de Legazpi named Juan Camus surveyed a fire-razed area where he found a somehow familiar figure relatively unscathed in a burnt-out hut. It was the Holy Image of the Child Jesus given by Ferdinand Magellan to Rajah Humabon(Carlos) and Reyna Humamay(Juana) on the FIRST Christian baptism in the Philippines.

The Spaniards established a colony naming Cebu "Villa del Santisimo Nombre de Jesús" (Town of the Most Holy Name of Jesus) after the Image of Santo Niño's discovery. This was the beginning of Spanish colonization in the archipelago — making Cebu as their permanent place of settlement and ultimately made it as the Seat of Government(Capital) for the islands. Years after, Miguel López de Legazpi occupied Manila and had it as the new capital.

The discovery of the Holy Image was considered miraculous; a church was erected in the area where the Image was found — a place now known as the Basilica Minore del Santo Niño de Cebu. Today, it is both a historical and religious landmark with millions of devotees annually, lining up to pay reverence to the Miraculous Image. It was founded by Fray Andrés de Urdaneta and Fray Diego de Herrera in 1565.

On April 28, 1965, Pope Paul VI issued a Canonical Crown for the Image through a Papal legate. And with the Papal bull "Ut Clarificetur", the same Pontiff raised the sanctuary a Minor Basilica on May 2, 1965.

Clothed in robes, Santo Niño served as the patron saint of Cebu. However, the Santo Niño is a representation of Jesus Christ as a child. The Catholic Church sets the Holy Child as an example of humility and as a celebration of the Incarnation. Since the Holy Child is a representation of Jesus, the Second Person of the Trinity, he cannot, as God, be considered a patron.

The Feast of Santo Niño is held locally on the second Sunday in January, followed immediately by the nine day long Sinulog festival celebrating the local conversion to Christianity with parades, music and dance.

Cebuanos do not consider the Christmas season over until the Feast of the Santo Niño(Sinulog). To say, CEBU celebrates the LONGEST CHRISTMAS season in the world — longer than the general Philippines does! Merry Christmas and VIVA, PIT SENYOR!

The Tri-Valley Santo Niño Prayer Group was founded in 1989 and has thrived in the Tri-Valley area with a strong membership of up to 250 families. The devotion of the Santo Niño is also considered the means of inspiring the highest values in upholding sacred traditions of the Filipino culture and heritage. The Santo Niño is looked upon as a powerful symbol of faith, the very symbol that made our mother country a Christian nation for 500 years of evangelization. The annual Santo Niño Fiesta is celebrated every second Saturday in January together with the San Leandro and  San Joaquin chapters.

Our Prayer Group has a chosen patron and we chose to be under the patronage of the Infant Jesus. We are especially devoted to Jesus Christ, the Son of God, in his infancy, who, though a God, humbled himself to be a small child to show us his fathomless love for humankind. His many virtues like humility, simplicity, and obedience, are for us to make reflections and to imitate.

Our goal is to evangelize and unite the Filipino community by upholding our culture and heritage; sustain and deepen the faith and devotion to Santo Niño (Holy Infant Jesus) to all the members of our prayer group throughout the Tri-Valley area and neighboring Cities.

St. Raymond of Peñafort Catholic Parish in Dublin welcomes our prayer group, the first and the only parish in the Tri-Valley that has recognized the Tri-Valley Santo Niño Prayer Group and has enthroned the statue of the Holy Infant Jesus in the parish chapel on September 18, 2016.

The Tri-Valley Santo Niño Prayer Group holds a monthly Santo Niño novena on the second Friday of the month at 7:30 pm in the chapel. Parishioners and members are invited as we venerate the Holy Infant Jesus with prayers and songs.

Documentary of the Infant Jesus of Prague