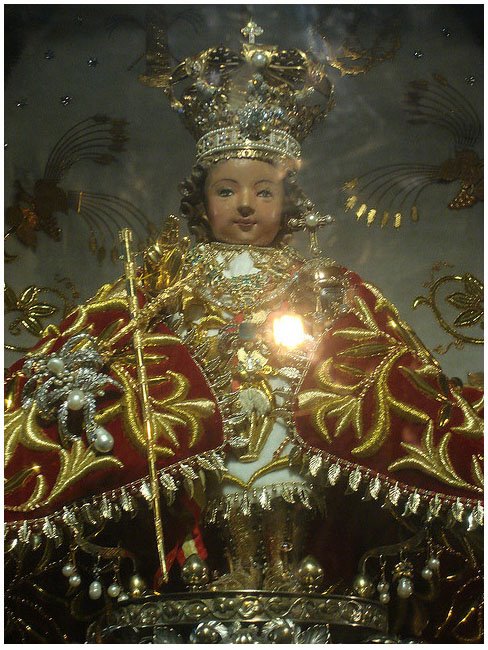 It is such a symbol of Philippine history “because it came with Magellan, became a native pagan idol, was reestablished as a Christian icon by Legazpi, and has become so Filipino that native legends annul its European origin by declaring it to have arisen in this land and to have been of this land since time immemorial.

In 1521, the expedition of Ferdinand Magellan discovered the Zubu Island for Spain and gifted the Image of Santo Niño to the island queen, Joanna.  On his death at the hands of Lapulapu’s Mactan warriors, his men fled back to Spain, leaving the image behind.  In its new environment, among sun-loving people, the image stopped to be a Christian symbol.  After some vain efforts on the part of the natives to destroy it, as legends say, it endured its new setting and prevailed to become a pagan idol.

Writer Joaquin talked about these years after the Magellan men left and before the next Spanish expedition came under Miguel Lopez de Legazpi – all 44 unaccounted years.  Joaquin said that “during that strange interlude… the wondrous miracle happened:  we accepted the Santo Niño as part of our land, part of our culture, part of our history.  During those 44 years when the Cross had vanished from our land, the Santo Niño kept us faithful to him”.

In those unaccounted years, the Image became part of Cebuano life.  And this is probably why when asked about the Image, as it was found in 1565 by the Legazpi expedition in one of the village houses, the natives refused to relate it to the gift of Magellan.  They said it was there at the beginning, since ancient times.

Writer Dr. Resil Mojares, also in a1980 paper, said that the claim of the 1565 Cebuanos that the Image was native and ancient in the land was probably because they were afraid to admit that it was a Spanish property or else it would be taken away from them.

The natives’ version of the origin of the Santo Niño is in the “Agipo” (stump or driftwood) legend about magical driftwood caught in the fishhook of an ancient native fisherman.  Everytime he throw it away, it reappeared until decided to keep it.  Then, oi! The fish catch became so plentiful for the fisherman that day.  The agipo, brought to the settlement, would later manifest its powers to the people – guard the people’s harvest, protect them from pestilence.

Writer Mojares says this legend of the magical driftwood would only be natural to the folk mind.  “The folk mind cannot completely conceive of a God that is manufactured in a workshop somewhere in a country called Belgium but it can believe that a God can rise out of the sea and bring on the rains by being submerged again in it”.

Thus, the unaccounted 44 years of the stay of the Image in the hands of the natives is part of Philippine history.  The Santo Niño, as writer Joaquin put it, “connected, he linked, he joined together our pagan and our Christian culture; he belonging to both.” The Santo Niño has been there in our early cultural growth, “an image in our quest, of our 400 years of history,”

Documentary of the Infant Jesus of Prague